The announcement arrived in my e-mail Inbox as follows.

That was unnecessary as I received a personal phone call from Congressman Walberg’s Deputy Campaign Manager. I also know members of his District field staff. Despite that I doubt the Congressman knows my name, and perhaps would not be able to recognize my face (and why would he), it is always fun to have a connection that one can maintain, and does maintain, with a political entity, individual.

Mind you, so far this has not helped me get a job, so my mother would to some extent question the utility of maintaining these relationships, and to a large but not total extent I agree.
We would both agree that there is some (great and incalculable) value to keeping Congressman Walberg in office and preventing the ascension of State Senator Mark Schauer to the DC-based federal legislature. There is a great deal of personal satisfaction serving my community in this small way. The Walberg Campaign needs warm bodies in its events and rallies; I enjoy serving in nearly any relevant role, and believe it or not, this is relevant. These things must get done. I must play my part.

I will admit to being more than a little jealous of the Walberg Deputy Campaign Manager for a variety of reasons and purposes. This covetousness must be dispensed with. I have my hopes, eternally, about finding continuous political work, work in my field that takes place over an indefinite period of time with no pre-determined ending but I have lapses in faith and I will always look in the Private Sector. One can still be a political animal and work in the Private Sector, and sometimes old dreams, even logical visions, just have to die. I never give up. The mission is not about me; the Crusade must continue.
So I took time out of my day to see Congressman Walberg at the Eaton County kick-off. It was one of a plurality across the Michigan 7th District. 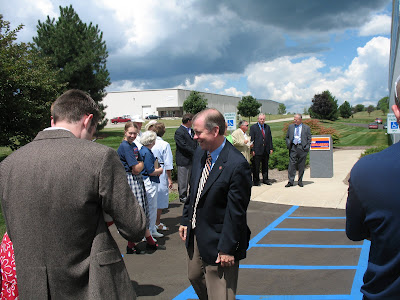 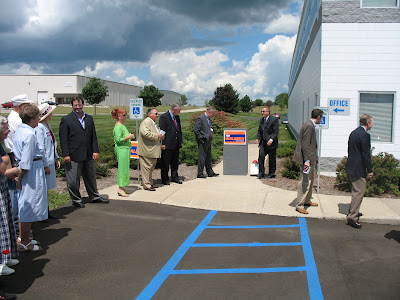 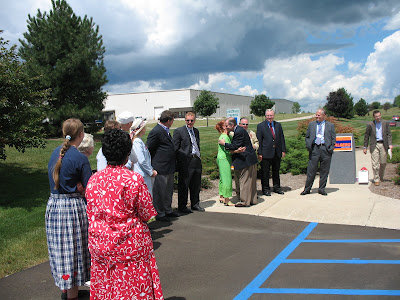 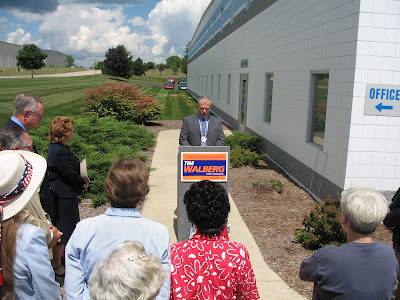 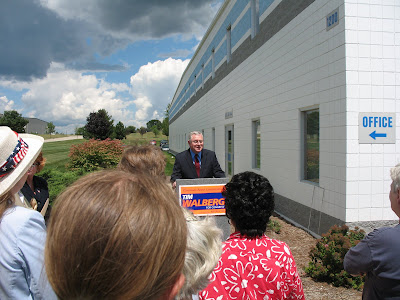 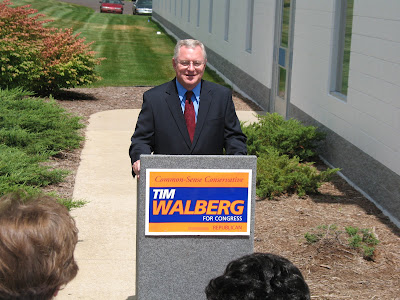 Rep. Jones, who is also the former Sheriff of Eaton County, introduces the next speaker. 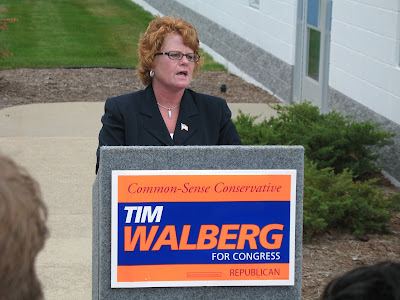 The next speaker is the Mayor of Charlotte, MI, Deb Shaughnessy. 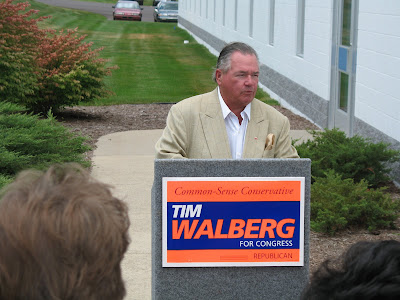 He introduced the legislator. 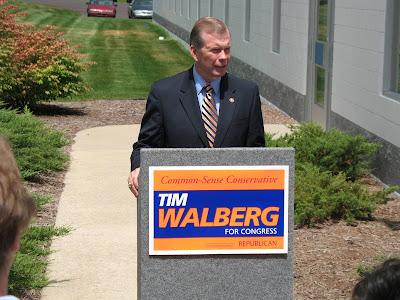 As he begins his speech he thanks everyone for arriving, including but not limited to the spy for Mark Schauer’s campaign who is obvious enough in the crowd. The spy refused to wear a sticker. The theme of the speech is energy. 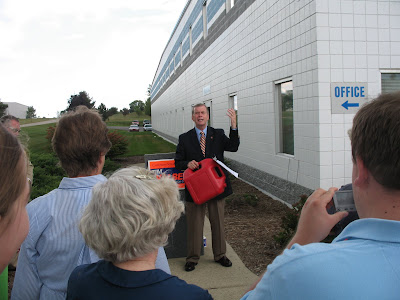 The gas can is symbolism. Part of the political play in this energy crisis involves stuffing supporters’ fuel receipts into this gas can and taking this gas can to “Mother Pelosi”, House Speaker Pelosi, as a rhetorical instrument demanding actual legislative deliberation, instead of Congressional vacation.

At this point it started to rain, so we retreated inside of Linn Products. I cannot recall what they make: something metal. I have more photographs inside the plant, but I do not care for them enough to just upload them here. Ultimately as we all arrived Congressman Walberg thanked various individuals as he could, and mentioned quite fervently State Senator Schauer’s rather naked rhetoric and legislation on energy. The representative from the Schauer campaign was there with a video camera; he almost looked like a tourist and acted vaguely friendly but he refused a sticker, and was there for the simple purpose of taping the speech hoping for something that the Democrat campaign could use out of context. The best the spy could hope for though was some fresh intelligence on the Congressman’s talking points, because there was nothing (that I could hear or notice) that would compromise Tim Walberg in the collective mind of his District, in the speech.

Tim Walberg mentioned (as I knew) that he was one of so-called “Guerrilla Congress” standing in the US House Chambers, congregating with other supporters of energy policy reform on a federal level, coincidentally all Republicans, in the face of Speaker Pelosi dismissing our fair and legally appointed, elected Representatives, so she could pursue a book tour.

The theme of this speech, and I reckon this campaign, is energy. There are a number of different elements and notions about gathering and distributing energy, including availability, cost and benefit. One wants petroleum to be less expensive and the American dependency not in the Middle East. The partisan stance on the Left rejects traditional terrestrial energy (I do not doubt that this rejection is related to the green lobbies and the global warming movements, which support the Democrats) in favor of un-traditional terrestrial energy, and “alternative energy”, neither of which has been proven in a wide-scale, economically viable and reproducible model…. and to some extent the “alternative energy” envisioned by President Bush in 2006, Governor Granholm a few years ago, and State Senator Schauer and Senator Barack Obama now, is of a greater science fictional quality than the moon shot when President Kennedy called for it way back then. Naturally Americans, including the “Big Oil” companies, use petroleum because it is the most efficient and least expensive fuel resource. The logical course of action, based on that, is to seek more petroleum. What is also logical, aside from keeping an eye on the basket we put the energy eggs in, is also to seek more baskets, different eggs, and keep a sort of open eye to what we know works and what we theorize might work.

I am only sightly oversimplifying when I state that the Democrats keep a firm dogmatic view towards the use of unproven technologies as the best choice, with the most national resources (at least what resources that the government can directly and indirectly control) dedicated towards vitalizing those technologies. I prefer the Right-Wing view, which is quite simple. We Americans support everything that does work, keeping in mind what might work. So we should release, allow, American petroleum companies to search for, pump, drill, refine, and take up, own, acquire all that black gold energy that is possible. The best goal is for government to get out of the way.

Congressman Walberg understands this. There is no high tax for a large company, be it an energy company or not, that is a moral default position, or morally is a default position. Unlike various advertisements for Senator Obama’s Presidential campaign or those seeking to tear Congressman Walberg from his seat there is no automatic American expectation for a producing company to be heavily taxed, and it is no sin for in American minds for a profitable company to not be punished for those profits, even if the product distributed that led to those profits is egregiously expensive. On the other hand, this ties in to the politics of class envy, which is a classic tactic of the Left. I hate that.

Nominally the solution to a necessary good being overly expensive is to increase the supply, which would lower the price. The Guerrilla Congress seeks to do that. It is not a Guerrilla Congress, however, if the Legislature convenes as normal and then, finally votes for the regulatory reforms, or at least publicly deliberates on regulatory reform as the Democrats stonewall, that would allow various “Big Oil” companies to pursue actions which would ultimately result in lower fuel prices

It is sick that the Democrat candidates talk about “alternative” sources of energy but they are not interesting in diverse sources of energy to the point where they would seek to support the original petroleum establishment. Eventually fossil fuels will burn out and run out, but crippling the industry to use those fuels while they are available hurts our economy now, and discourages the principal actors when it comes to innovation later.

When it rained, the Congressman took the speech inside the plant. He asked us to sign the petition, to send messages however we could.

Before it rained the Congressman described his photo opportunities at various gas stations.
He also referred to a television advertisement that he had filmed, one which gave him the opportunity to ride his Harley-Davidson motorcycle, and not do so just for fun.

Naturally when the speech was over those of us that could took Walbeg lawn signs.

« Template Update
who is this young woman? »