Obama in Lansing and the Tire Gauge Stunt

Most individuals know that Senator Barack Obama arrived in Lansing on Monday (August 4th, 2008) and performed a speech at the Lansing Center. Logically with a throng of Obama supporters and would-be supporters it was an excellent opportunity for Republicans, detractors of Barack Obama, and supporters of John McCain to assemble and affect some kind of response. I made the joke that the crowds essentially resembled “religious fanatics.” Well, I joked continuously that they were religious fanatics. This is somewhat unfair to many of the Presidential candidate’s supporters, yet I am getting into the habit of referring to some Democrat candidates as those who promise something for nothing, and hint that that sort of thinking is dangerous for a society. I also made the joke that many were there just to touch Senator Obama’s clothes. This is more or less part of a societal meme and borderline sacrilege on my part than serious commentary; yet there is a strange resemblance between political rallies and religious revivals and politicians, statesmen, would do well to make the content of their speech and action reflect the distinction(s) between the two.

Interestingly enough, this is not only Senator Obama’s 47th birthday, but the day before Senator McCain’s tire gauge attack really made a genuine impact across the country.

The response that was launched on that day involved a pack of approximately seven people (not being a journalist means I forgot to feel obligated to take a proper count, let alone a proper picture of us) acting as volunteers. Included in that group were three official McCain staff operatives, including the intern from the Farmington Hills office (the head office of the McCain Campaign in Michigan), and three volunteers, as well the official camera man. 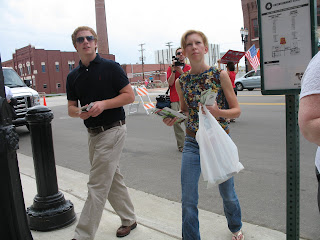 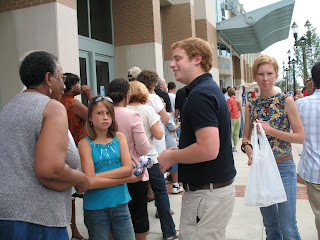 The intern attempting to give out a tire gauge to Obama supporters. The intern talking with the media. 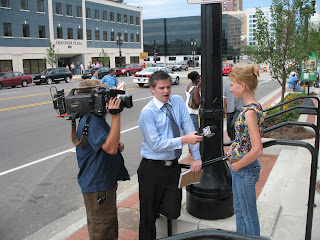 The McCain staffer talking with the media. 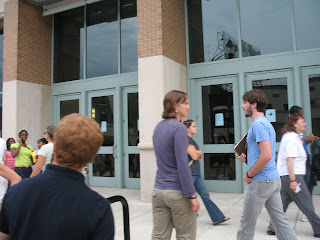 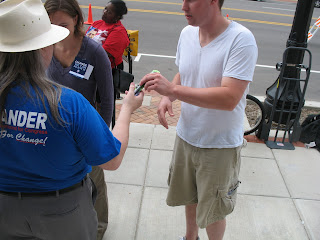 Another volunteer, who shall remain nameless, handing a tire gauge to a Bob Alexander registrar. 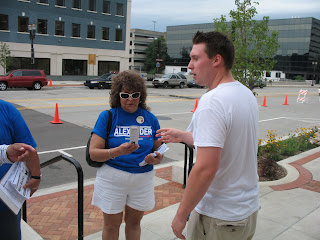 This is the same volunteer handing another gauge to another Alexander supporter.

(There are no pictures of me because I took my own pictures).

What is interesting is that Gretchen Whitmer (if I recall correctly) and Mark Schauer refused tire gauges, even after the explanation. Since this is before the “McCain gives out tire gauge” thing gained national attention we showed up incognito and were passing out the gauges as a public service, explaining it straight, as if it were a useful thing to follow Senator Obama’s advice to check your tire pressure to save gasoline and petroleum, and thus reduce the need for oil and curb the need for more oil. Interestingly State Senators Whitmer and Schauer do not seem to care. The point was to make some sort of a stir and highlight the ideas as ridiculous. I think we failed. At the time I thought it was a stupid idea and a wasted opportunity. As conservative talk radio show hosts and various pundits may think it is clever now, and for all I know it has made a negative impact against the Democrat candidate, at the time it was simply one day before it became widely known. In hindsight it was one poorly-executed part of a fine idea. We had about six or seven volunteers and I believe one individual with an inexpensive video camera. We certainly did not give out many tire gauges and we ran out quickly.

One analysis later from a fellow volunteer simply came out the staff simply was not quality. I have no qualm with that analysis. Our half of the event was a failure. It is fine that we were invisible as volunteering for McCain. But we did not make such an impact to take even a fraction of attention away from Senator Obama’s speech.

As it is, I think the tire gauge giveaway is an excellent idea in hindsight, if done in a proper volume. Anything that brings up a discussion of the “energy crisis”. I believe most people do not get the joke, which mostly implies that no matter how much gasoline one saves by keeping their tires at the proper air pressure, or how efficient that keeps one’s automobile, it is something that a lot of people were doing anyway, or should have been doing, and so is not worth much. The second implication is that even with the most efficient fuel economy one’s automobile is capable of, that is not a replacement for simply seeking more fuel.

The greatest reason the tire gauge stunt is effective overall is that it actually casts a lighter shade to the whole election. While staying close to the issues, making fun of what an opposing candidate says, advises or implies quite effectively keeps everything from getting too serious, reminds that John McCain and company are not as humorless as the Republican Party’s collective reputation would have people believe. That routine automotive maintenance alone is as great a contribution towards ending fuel price problems as seeking more energy sources is ridiculous, but this exhibition is more politically effective than any mere words spoken by a Senator could ever be.

Scouting in Michigan and emergency orders