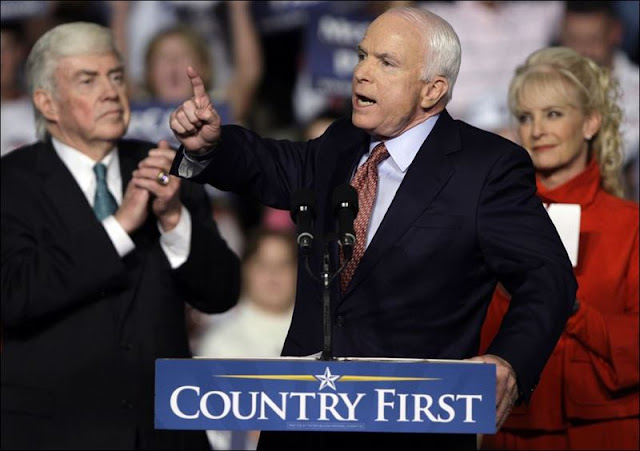 Jack Kemp was a man who in serious Conservative circles used to carry serious weight for his work and beliefs in Ronald Reagan’s supply-side economics. Economist and NRO/CNBC pundit Larry Kudlow addresses Mr. Kemp’s endorsement of Senator McCain under this light.

Jack Kemp’s endorsement of Sen. John McCain for president is both interesting and significant. Kemp was one of the founders of the Reagan supply-side tax-cutting movement. And of course, he’s been a prominent free-market advocate for economic-growth policies for several decades… The former-Buffalo, New York, House member/Housing secretary and 1996 GOP vice-presidential candidate would surely be able to relieve doubts about Sen. McCain’s tax-cutting intentions should he become president… McCain has steadfastly maintained on the campaign trail that he would preserve the Bush tax cuts on capital gains, dividends, and personal incomes that are set to expire in 2010.
Kemp would join former Sen. Phil Gramm as key McCain economic advisors. As I noted in an earlier post, Phil Gramm is the quintessential free-market advocate. He spent a career in the House and Senate limiting government spending, taxing, and regulating.
Both Kemp and Gramm are strong free-trade supporters. Gramm was also the original sponsor of the Reagan tax-and-spending cuts back in 1981 in the Gramm-Latta bill reported out of the House. That bill incorporated Jack Kemp’s original proposal to slash personal tax rates by 30 percent across the board.
Down through the years, Jack Kemp has been a tireless advocate of economic growth through supply-side tax reform and free trade. Getting him on board is a real coup for Sen. McCain.

Mark Levin sees it how I see it, and how other, smarter Conservatives (Conservatives that are smarter than me) see it. This does not make Senator McCain look better, it continues to make Jack Kemp look worse. To many Jack Kemp is a disappointment and to some he is a shell of a promise of his historical 1980s self.

Sorry Larry, but most endorsements mean little, and Kemp means less. His 1996 performance against Gore was a long-time turn-off for many, not to mention his affinity for open borders and affirmative action.

Jack Kemp’s (confrontational) connection to Al Gore is what throws his credentials out the window. Of course, to many, Jack Kemp is still not the softy from his Vice-Presidential bid of 1996 and to those this could be influential, but to the common man few will remember Kemp and those that ask (me) will not be learning of him in a favorable light.