*WARNING FOR PARENTS* If your kid is interested to play guitar, never buy a guitar starter package. I’ve seen many parents throughout the years buy the low cost and also cheaply made guitars with the thought of, “Well, if Timmy likes it and gets good, then, we’ll get him a better guitar.” This is what I’ll deem as the guitar-starter-kit fallacy.
I suspect that if a kid spends the majority of his time trying to re-tune every 5 minutes and rubbing his fingertips raw on uncomfortable strings and exaggerated string to fret board distances, he’ll likely give up entirely. Little Timmy doesn’t stand a chance to love the instrument.

Those were the final words posted by Andrew Kuluza on his Facebook wall, at least those visible to anyone not his Facebook friend.

He and I apparently shared a common cause and were in the same political coalition, at least as Grover Norquist would describe it.  We were among the Right.  Certainly “politics” is a large field, with fifty states and a capitol city district, 51 playing fields, city conflicts, local issues, counties, state legislative arenas and US Congress, compounded until the end with endless seas of non-profits and focused “non-partisan” issues–based causes.  Throughout that “politics” can prove to be small, wherever if you look on Facebook the “mutual friends” list can come down to, in the cause of Mr Kaluza and myself, “34 Mutual Friends”.  Although at least one of the people on that list did not actually meet the and I haven’t met all the people on that list

So his passing doesn’t create a hole in my life.  I will not reflect upon his passing with a musing how it tears something in my own experience yet he died young; when someone dies young, even at the end of a life well lived and goals well met I’m immediately struck by the bereaved.  Sympathy for those who lose this person may finally bring me to my knees and weep.

But I’m not going to say that people are not supposed to die young.  But we are supposed to be saddened.

Andrew Kaluza was also active in the Students For Liberty and Young Americans for Liberty, organizations I brushed with but also with whom I was never involved.  May he rest in peace.  I did not know him nor interact with him that I recall, but my earnest condolences to his family and loved ones. 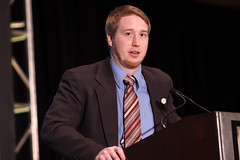